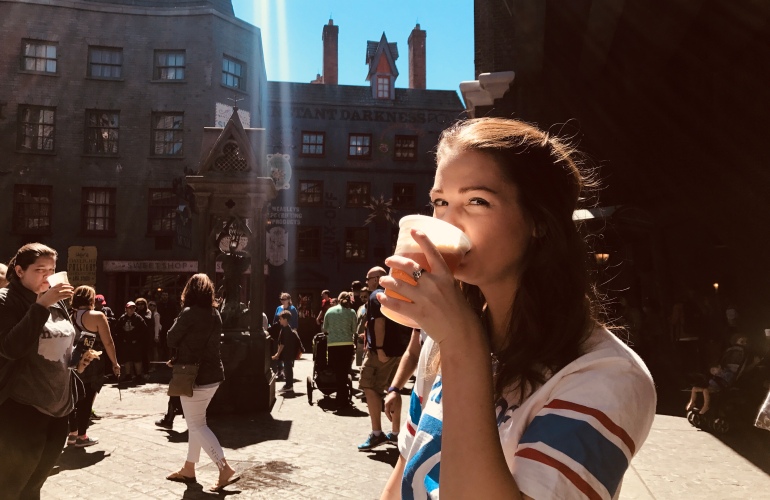 I’m 26 years old and I just finished reading the Harry Potter books for the first time. What took me so long? I loved the movies, but was never really able to get into the books. I didn’t start them when I was young like I should have. Then I tried to read them in high school and again in college and I just didn’t have the mindset to get through the first couple chapters of the Sorcerer’s Stone.

But two years ago, I tagged along on my boyfriend’s work trip to Orlando and we visited the Wizarding World of Harry Potter. I fell in love and decided I needed to read the books.

And yes, it took me a full two years. I enjoyed Sorcerer’s Stone. It was an easy read, had a lot of fun and excitement. I absolutely love the way Dumbledore is portrayed in the books and I’m sad that Peeves didn’t make it into the movies. I knew I couldn’t rush through the rest of the books.

Everyone kept telling me I needed to chug through the first two books, but I also enjoyed Chamber of Secrets and it wasn’t hard for me to get through.

One thing about the movies is I started to get a little lost around the Prisoner of Azkaban. And I was right to because the book goes into so much more detail about the friendships of the Marauders which I loved. Books 1-3 were good reads because they almost always had happy endings, but as an adult I was excited for the character development and plot that was about to unravel.

Everyone hypes up Goblet of Fire a lot, deservedly so because it’s a great book. Dobby definitely deserved more screen time in the movies, but besides that I think they are pretty accurate in getting as much info in as possible. After Goblet of Fire, I had only seen bits and pieces of the rest of the movies so the next few reads had some surprises in store for me. I knew the big plot deaths because of spoilers, but I didn’t know everything.

Order of the Phoenix was really just as good as Goblet of Fire, it had a lot of action which was exciting. It was the first one where I kind of felt like I needed a long break before I read the next one just to digest what happened. I began to hate a lot of characters (lookin at you Umbridge, Kreature, and Bellatrix).

And lastly, I finally got around to reading Deathly Hallows. Even though I hated everything that had happened in the last two books. I had to hope for some sort of ending that brought it all together, that made all the pain worth it. Even though Deathly Hallows was a blood bath, it resolved the series really nicely for me. I hadn’t seen ANY of the last movies so I was actually 100% surprised when it came to this book. There were a lot of twists at the end that I wasn’t expecting and the writing didn’t make it super easy for me to connect the dots of some of the mysteries which I enjoyed

I’ve always tested as a Slytherin and even after I finished I was like let me check one more time now that I have all the book knowledge. But no, I’m a Slytherin. Which I used to think was cool but after I finished Deathly Hallows I was trying to find like one good Slytherin person and there really aren’t any!! While I’m obviously not like a Hermione or Luna or Ginny, and I am a little like a Slughorn, I definitely wouldn’t have been a Death Eater!

Those are my final thoughts on the series. I still have to watch the last movies and then in the near future I plan to read alongside of the podcast Bingemode because I know I probably missed a lot during the first read.